Snapchat is a tantalizing platform for brands seeking a fresh way to reach customers.

With millions of daily active users and an ever-evolving set of advertising tools, there’s a lot to like about the six-year-old social network. But before diving head first into Snapchat, there are some burning questions many brand marketers want answered.

Fortunately, we have answers.

Is Snapchat really just an app for teenagers?

There’s little doubt Snapchat has become a popular digital hangout for teens. According to research from eMarketer, there will be 15.8 million American teenagers on the platform by the end of 2017.

Despite this significant number, teens don’t actually make up the overwhelming majority of Snapchat’s user base. On the contrary, there are actually many more adults using the camera-centric app than you would think. Snap reported people ages 25 and older actually represent 42 percent of daily US users, while 36 percent were 18 to 24.

“More than 50% of our daily new users in the US are over the age of 25,”said James Borow, Snap’s director of revenue programs, in an interview with eMarketer. “I think that’s something really key that marketers should be aware of.”

However, most adult Snapchat users still skew younger rather than older on the generational spectrum. The projections from eMarketer are that 58.6 percent of the social network’s total American users in 2017 range from 18 to 34 years old.

Why do people use Snapchat?

For starters, Snapchat is inherently private by nature compared to its rivals. Discovery of other users and content is not on an open network like Instagram and Twitter. This is particularly appealing to younger people, who have seen older generations share way more information than they probably should on other social media platforms.

The privacy of Snapchat content also creates more intimate communication between its users. As opposed to broadcasting to the masses, sending and receiving snaps can be a one-on-one experience. 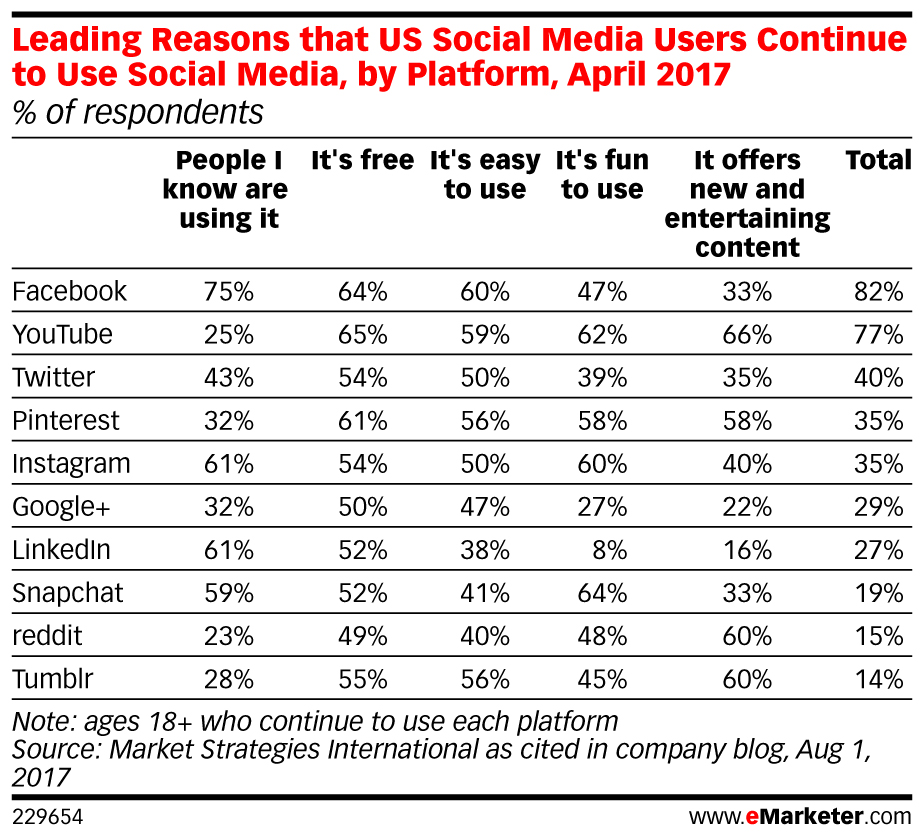 Fun is another reason why people have flocked to Snapchat. Research by Market Strategies International found this to be true in an April 2017 study of US social media users. They found 64 percent of respondents who were Snapchat users said they used it for fun, more than any other platform chronicled in the survey.

The appeal of Snapchat as a fun social network is largely driven by its creative tools. High quality features like its geofilters and augmented reality lenses separate Snapchat from its competition.

The appeal of Snapchat as a fun social network is largely driven by its creative tools. High quality features like its geofilters and augmented reality lenses separate Snapchat from its competition.

What are the best opportunities to market?

When it first began generating revenue through advertising, Snapchat previously charged marketers a premium. According to eMarketer, a flat fee of $750,000 was required for early advertisers.

Since then, the cost to advertise on Snapchat has come down to reasonable prices that even small businesses can afford. In June 2017, Snapchat launched its Ad Manager Platform for self-service ads, which closely resembles Facebook’s Business Manager tool. The per-campaign minimum is priced as low as $50, which allows users to pay for video and still image placements.

The most popular and cost-effective way for brands to start marketing on Snapchat is through geofilters. They are custom-designed frames overlaid on a snap showing where a person was when a video or picture was taken. McDonalds was the first major business to run a sponsored filter campaign in 2015.

Brands can purchase a geofilter for their events, businesses or specific locations to make it easy for Snapchatters to share their message with friends. The cost depends on a few factors, including where the geofence is and how long it will remain active. According to Buffer, Snapchat charges approximately $5 per 20,000 square feet.

Sponsored lenses is another high-quality marketing option for brands, but they’re not cheap. According to Business Insider, 24-hour lenses tied to specific holidays and events costed upwards of roughly $100,000 to $750,000 in 2016. Lenses, however, represent probably some of the most popular and successful examples of augmented reality today. In 2016, Taco Bell created a sponsored lens for Cinco de Mayo that was viewed more than 224 million times.

Thinking of making Snapchat a part of your strategy? If you’re just getting started, Awlogy can assist. Contact us for more information.