Who Are the Biggest Spenders in Programmatic Advertising?

The word is out on the companies that sit atop the mountain of programmatic advertising. A new study found that some of the world’s biggest brands such as Amazon, Microsoft, Charles Schwab, Coors Light and Dell own the biggest slices of the programmatic pie.

Amazon’s dominance in programmatic ad spending comes as no surprise, considering that more than half of all consumers start their product search journey on the e-commerce platform. A healthy programmatic advertising strategy has likely proved fruitful for Amazon to “efficiently reach a large number of online consumers” according to Marketing Dive.

“Big brands are buying programmatically and Amazon is leading the space,” said MediaRadar CEO Todd Krizelman in an official statement. “Amazon is the top ad spender in retail, pouring billions into marketing. A big piece of that pie is dedicated to programmatic.”

The top 10 companies with the largest investments in programmatic advertising are: 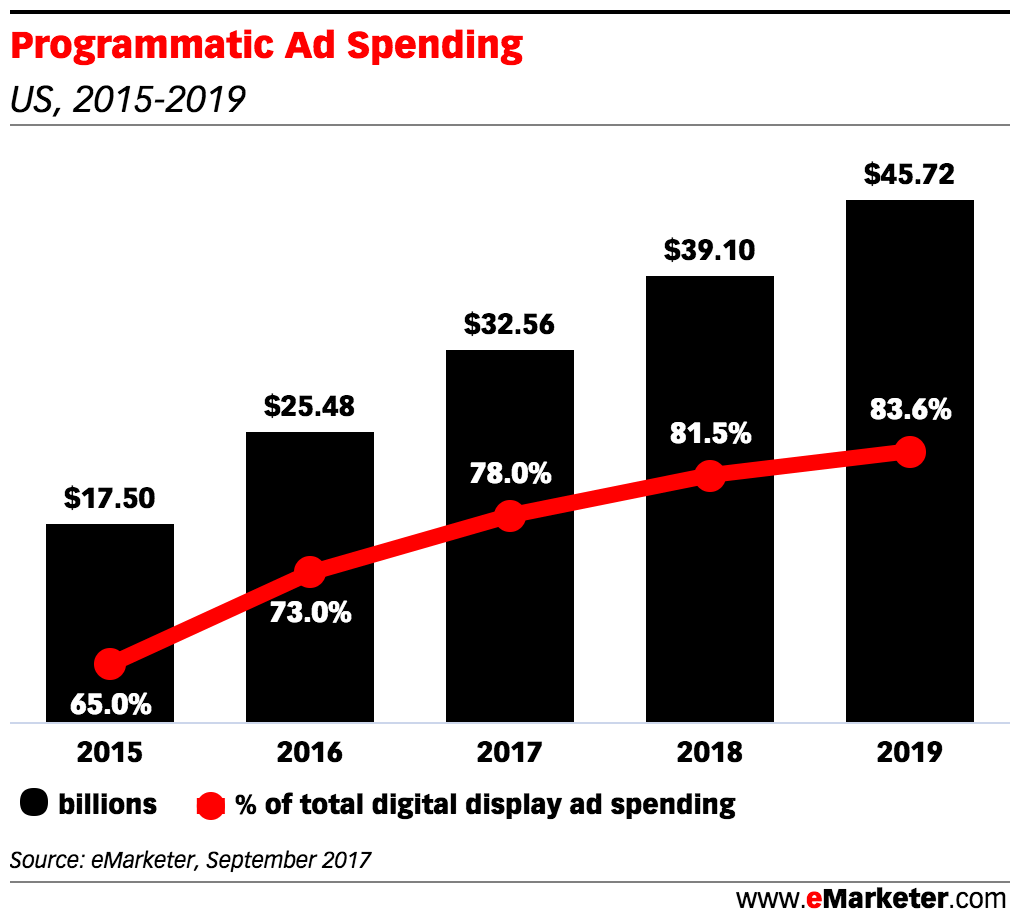 Though brand safety continues to be a major concern, it hasn’t stopped brands from continuing to invest in programmatic campaigns. Of the top-50 programmatic spenders in the first quarter of 2017, 94 percent of them ran programmatic placements again this year.

The research examined numerous companies that placed ads programmatically in the first quarter of this year. The report then compared this year’s findings to results from the same quarter in 2017 to measure any changes. They found that 75 percent of all brands buy ads programmatically.

The MediaRadar report is just more evidence of the rapid growth of programmatic advertising. About two-thirds of the world’s digital display advertising will be purchased programmatically according to an analysis by Publicis Groupe Zenith. Additionally the report, which was released at the end of last year, notes that programmatic ad sales have grown at a rate of 21 percent per year.

“Advertisers need to understand the it won’t be long before digital display is 100% programmatic, and that some of what we consider ‘traditional media’ will follow fairly shortly,” says Jonathan Barnard, head of forecasting and director of global intelligence, Zenith.

MediaRadar’s analysis also demonstrates that marketers are not shying away from utilizing programmatic ads to also power native ad buys. More than 42 percent of brands ran native advertisements in the first quarter of 2018. According to MediaRadar, that figure is up 10 percent year over year.

Per eMarketer, native ad spending is projected to make up roughly 60 percent of the digital display market, totaling close to $33 billion. However, native advertising growth appears to be slowing down based on further analysis. Over the last three years, its annual increases have dropped from roughly 64 percent in 2016 to 50 percent in 2017. Its forecast for 2018 is an increase of only 31 percent.

Want to advertise programmatically, but don’t know where to start? Awlogy can provide you with proven solutions that can help your brand achieve its goals. Find out more by contacting us today.