The way we use social media yesterday is not the way we’ll use it tomorrow. But there’s plenty of value in looking back in the past. Examining social media usage over the years gives us hints on where it’s headed in the future.

Edison Research looked at American usage trends in a new report titled The Social Habit. As its name suggests, the report explores routines of social media users in the United States.

The study used three different methods to compile its research. First, was a phone component. Edison reached out to 1,500 people, ages 12 and older, through a random national telephone survey. Next, it polled 850 people, ages 13 and older, through a national online survey. To cap its research, Edison interviewed, in person, 12 social media users between the ages of 18 to 29.

The Social Habit offers critical insights on American sentiment toward social media. Its biggest finding? A drop in Facebook usage among U.S. users.

Below is a look into why interest in Facebook has waned, along with some other key findings in the report.

About one-third of Facebook users are using it less often than when they first joined.

A decline in Facebook usage has occurred across all age ranges. But, Edison notes that younger people have dropped off the platform the most. Since 2017, Facebook has lost about 17-million users between the ages of 12 to 34. That’s a decrease of 82 million to 65 million people in the last two years.

It’s worth noting that the decline is not only a matter of people opting out of Facebook completely. With 172-million users, Facebook’s still the biggest social network in the United States. Many people stay on the platform, but choose to use it less than before.

What are the reasons why people are on Facebook less? The answer to this question varies depending on age.

People in this age group say they’re enjoying other social media sites outside of Facebook. Their usage has shifted to networks like Instagram. The reason? It’s a platform where younger users can connect with fewer older users.

The negative atmosphere of Facebook is the issue driving these users away. There’s a growing sense that Facebook has become too toxic of an environment. Some people even cited that they stopped using Facebook for mental health reasons.

The chief concern among these users who’ve decided to walk away from Facebook is privacy. The social network’s struggles with data protection have been well chronicled. It’s an issue they’ve worked to address over recent years, but know they have more to do. 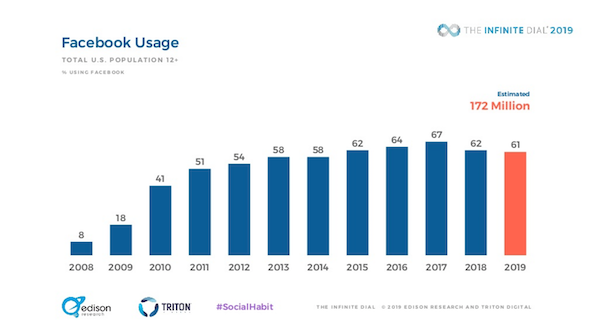 Other Key Findings from the Social Media Habit

The report also shares critical details on how Americans use other social platforms. These were three main takeaways that stood out to the researchers at Edison:

The gender demographics of core users vary across social media brands. More male users were on Twitter and LinkedIn. Pinterest and Facebook users, meanwhile, were likely to be female. Snapchat was an event split.

Younger users and older users had different tastes in social media. For people ages 12 to 34, Snapchat, Instagram, and Twitter had the most American users. Facebook and Pinterest, meanwhile, had the highest concentration of those over 55. Finally, LinkedIn had a huge core base of American users ages 35 to 54.

As far as ethnicity, WhatsApp had the most diverse user base. Edison noted that the majority of users from the U.S. were Hispanic (38%). Following that, 28% were caucasian, 27% other ethnicities, and 7% African Americans.

Trying to find out which social media platforms your audience use most? Awlogy can help with that. Contact us for a consultation call today.