Where Does Programmatic Go From Here?

In the past decade, programmatic advertising has become the preferred choice for many brands looking to effectively reach their audiences.

Lauren Fisher, principal analyst at eMarketer, joined a recent episode of the AdExchanger talks podcast to discuss her latest findings. She also offered some key insights on how eMarketer generates their report.

“Five or six years ago when we built the forecast, we didn’t have programmatic numbers,” she said. “We had numbers for company revenues overall, but we really had to do the legwork and talk to people in the industry to understand…”

That legwork involved asking questions to businesses about what percentage of their revenue could be attributed to programmatic. It also required asking advertisers how much of their clients’ spend went toward programmatic. For years and still to this day, background conversations fuel the making eMarketer’s forecast. 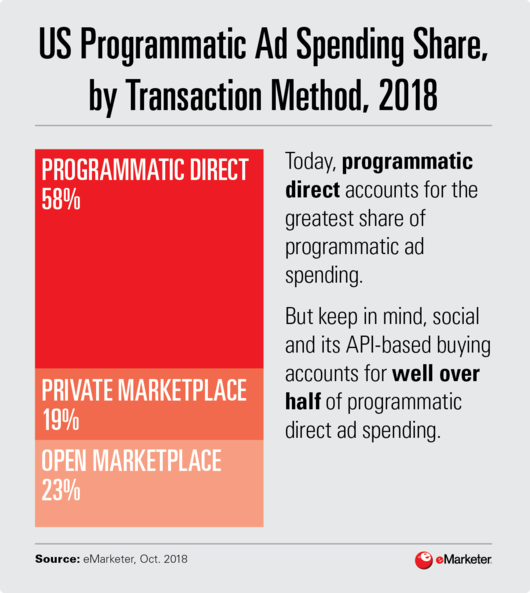 A point of emphasis in this year’s forecast was on private programmatic deals. A large number of digital media advertisers are spending their dollars programmatically in closed-ended markets. Two types of non-open markets exist – private marketplaces and programmatic direct.

There are a handful of industry factors driving the adoption of private programmatic marketplaces. But a top reason is greater control.

Brand safety and ad fraud have been two of programmatic advertising’s major shortcomings. As technology improves and solutions are created to fix these problems, there’s speculation whether ad money will move from private back to open marketplaces. To Fisher, that is yet to be determined.

“The other thing you need to remember, as it stands now, a lot of what’s beneficial for these private deals is that you’re getting a premium data asset along with it,” Fisher said. “A publisher is not going to put their first party data into the open markets. They’ll make it available in a private marketplace or in some sort of a programmatic guarantee.”

Facebook and Google control much of the programmatic, let alone digital advertising market. Despite the scrutiny, the two have faced in recent years, there’s little to suggest they’re going anywhere soon. Their competition remains sparse, but one of their competitors is worth paying close attention to.

Amazon has emerged from the pack to lay claim as the third biggest digital advertising platform in the United States. According to eMarketer, about four percent of all US digital ad spend went to Amazon last year and that share will rise to seven percent in 2020. As an eCommerce platform, Amazon offers an attractive value proposition to advertisers since most of their traffic is likely in a buying mood.

Fisher also notes that it’s worth paying close attention to traditional media brands over the next few years. Companies like Disney and NBC are investing heavily in their digital properties and will seek to take a bigger cut of programmatic advertising’s multibillion-dollar market.