When it comes to the boom in digital video, the smoke isn’t clearing anytime soon. Ad revenue and brand investment continues to explode, with industry analysts forecasting continued growth the rest of 2018 and beyond. 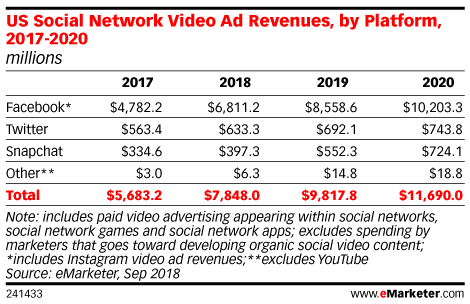 Despite some of the challenges they’ve faced, social media are still major points of emphasis for advertisers seeking distribution to execute video campaigns. For the first time in its history, eMarketer included recent projections of US ad spending on social network video. The verdict? Ad revenues on video is expected to reach close to $11.69 billion by 2020. That’s roughly double ($5.68 billion) the amount of advertising brands spent on social media video in 2017.

It’s no surprise that Facebook leads the pack of social network companies in ad video revenue. Last year, it took in approximately 84 percent of all social media video revenue, dwarfing competitors like Twitter and Snapchat in the process. With its ownership of Instagram, which has transformed into its own content giant thanks to its over 1 billion monthly active users, Facebook is primed to remain in the driver seat of social media video for years to come.

In addition to social media video, Facebook is also projected to control nearly a quarter of the entire digital video landscape. Double-digit growth is expected to continue well over the next two years according to eMarketer.

Here’s what eMarketer’s principal analyst Debbie Aho Williamson had to say about Facebook’s influence in the video market:

“In-feed video has been a successful ad format for both Facebook and Instagram. “Marketers rely on in-feed video ads to capture users’ attention and build brand awareness. A newer video ad format, in-stream advertising in Facebook Watch shows, is still relatively new, but we think advertisers will increase their usage of it because it is similar to linear TV advertising.”

So what about other social competitors?

As mentioned above, Facebook stands above the rest of its competition in the social media landscape. However, that doesn’t mean platforms like Twitter and Snapchat are non-factors. The two companies are hanging their hats on a feature that has mired Facebook in controversy in recent years.

According to a Hub Research study detailed by eMarketer, 38 percent of those surveyed were confident about Snapchat’s capability to secure their data and 31 percent felt similarly about Twitter. In comparison, Facebook only garnered 19 percent of comparable sentiment of US TV viewers ages 16 to 74 who have home broadband and watch at least an hour of television per week.

Both Snapchat and Twitter rely heavily on video advertising to bolster their total ad revenue. According to data compiled by eMarketer, 60 percent of Snap’s advertising revenue originates from video. Twitter, meanwhile, has 55/45 percent split, with video ad revenue leading the way.

And how is traditional video faring?

Television advertising is back on the decline after a brief uptick this past year. According to MediaPost, MoffettNathan Research projects a 4.3 percent drop in total TV advertising for 2019.

When examining specific television verticals, local is expected to take the biggest hit with a drop of 7.2 percent in ad revenue. Local cable comes in second with a projected decline of 4.1 percent. Next up, ad spending on the major networks (Fox, ABC, NBC and CBS) is predicted to sink by 3.5 percent while syndication on national TV is projected to fall by one percent.

“Looking at the composition of long-term U.S. ad growth, it becomes evident that the rise of internet and digital has come at the expense of traditional media,” writes Michael Nathanson, media analyst at MoffettNathanson Research.