For many advertisers, dedicating a large percentage of their ad budget to Facebook has become a normal part of business. With that said, it should be exciting news for them that advertising prices are slightly trending downward.

On Wednesday, January 30, Facebook conducted its Q4 Earnings Call with investors. The 15-year old social media giant discussed details about the state of advertising across their platforms. They noted that the average price per ad decreased by two percent in the fourth quarter of 2018.

Despite the drop, ad impressions served across Facebook’s family of applications increased by 34 percent. Instagram ads on both feed and stories spurred the growth of impressions. Facebook’s mobile news feed proved to be a driving factor in growth, too.

“The year-over-year decline in average price per ad reflects an ongoing mix shift towards product surfaces and geographies that monetize at lower rates,” Facebook’s CFO Dave Whener said on the quarterly call. 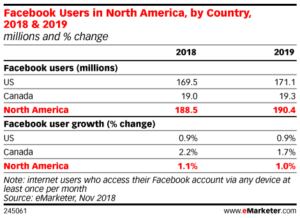 Stories are one of the likely reasons for the decline in average advertising price across Facebook properties. Costs remain lower on stories due to more unsold inventory than a flagship channel like the feed. This presents a cost-saving opportunity for businesses willing to experiment with their advertising budget.

Facebook reported that about 2-million advertisers are using stories to reach their customers on their family of applications. That number is dwarfed by the 500 million daily active users on Instagram alone that Facebook reported at the end of Q4 2018.

“One of the challenges that marketers have is keeping up where consumers are,” Facebook’s COO Sheryl Sandberg said on the call. “If you think about our history, people made the shift to mobile before marketers did. And I think one of the successes we’ve had is we made it easier for advertisers to move into a mobile environment. And just as we did that in mobile, now we are very focused on doing that in the new things that people are doing, and stories is a big part of that.”

Quarter over quarter, total ad revenue for Facebook increased by about 30 percent to $16.6 billion. Facebook enjoyed the largest growth in ad revenue in the Asia-Pacific region, where growth was 34 percent. North American ad revenue grew by 31 percent followed by Europe at 28 percent.

Facebook’s influence continues despite its struggles over the last few years with privacy and social issues. From 2017 to 2018, monthly active users across all platforms grew to 2.32 billion people, a nine-percent year-over-year increase.

“Ecommerce is an important vertical for our advertising business,” Whener said. “Our success in continuing to build good advertising products for our e-commerce clients on the advertising side will be a more important contributor to revenue in the foreseeable future than the new areas.”

In late 2018, Instagram added two new functionalities for shopping on Instagram. The first expanded the feature to Stories, while the second made it possible to shop through the explore section. Users that shop on Instagram are then directed to a business’ website in order to complete their purchase.